We Used to Be Friends is a collaborative teenage detective drama game. As a group, you’ll create your teenagers, the city they live in, and a season-long mystery that ties them all together.

We Used to Be Friends involves a series of interwoven mysteries. You’ll have your season mystery, every character has their own personal mystery, and each session has its own episode mystery. Since the game is collaborative, you’ll investigate locations to find clues and then apply those clues to the various mysteries, moving them along as you discover what happens together. No one needs to plan it out before you play. You can pick up the game and immediately begin to figure out who did it.

While the mysteries are going on, the characters still live their lives. They have friends, enemies, acquaintances who are all around them. They open up to each other, they fight over their feelings, and get into trouble while figuring out what happened. Part of the essential conflict and drama of We Used to Be Friends is balancing the tension of the mysteries with the reality that these characters all have to live in the same town.

You can listen to some Actual Plays by checking out the links below:

Party of One Podcast

In order to download this wutbfAshcan you must purchase it at or above the minimum price of $5 USD. You will get access to the following files:

Support this wutbfAshcan at or above a special price point to receive something exclusive.

We're creating community copies! When someone buys this game or the full version of We Used to Be Friends, we create a community copy!

If you are unable to purchase the game because of financial hardship, then grab a community copy! You can help by spreading the word, leaving a great review, playing it on your APs, and talking about the game with those around you!

Games are for everyone, and money shouldn't be a barrier to entry!

Hey Firestormink! I'm playing this game tonight with some friends. I was just listening to your AP on the party of one podcast.  Great stuff.
Where can I find that clue generator you were using?

Hopefully the game was fun!

The clue chart is in the final version of the game. I'm getting there so hopefully we can have it be seen by everyone. Tim did a fantastic job with it.

cool! I look forward to it.

I also put this together for our game. feel free to use it however you feel.

That doc is amazing.

Shhhhh ... I copied to sheet and then added some stuff.

Couldn't figure out how to get the BFF mode to change but ... anyway added bits of the Ingenue and the Libertine. ^_^

Also replying here in case I made a mistake and it doesn't ping you when I sent the other link. ^_^

Ah, some of the character info switches, and some don't. I was putting this together quickly and stopped with this data validation part. sorry. I'll try and remedy that at some point.

No worries! I ended up doing some of that work! Check out the updated 3.1 doc and I've added a 6th character, and a place for the Basic Moves so you can link and a few other things!

No apologies needed! This was amazing and I had fun going through and figuring out how to futz around with it! ^_^

Hello! I've just bought your game and it sounds really great. I can't wait to play it when I'll be able too. I appreciate your hard work!I know this is an ashcan version, but you do mention the season mystery in the description.  It's probably going to be in the final version, but I would love to hear a bit more about what you plan for this. Do you have any advice on how we can incorporate it as a homerule, when we play the game? It's okay if you can't answer, but I had to try to ask you this haha

The easiest way is actually understand it's another mystery.  You build it like another mystery but ask every player how it is tied to their character.

Thank you a lot!!! I can't wait for an opportunity to play this with someone.
Also your game inspired me to watch Veronica Mars! I really like this show and I don't mind becoming a marshmellow haha

Hello Jonathan, I just listened to the episode on Party of One and want to give it a try. I think I own a copy from the Bundle for Racial Justice last year.

I see the update log but the files that I can download don't include them. Is the log just to let us know where you are on the revisions or am I missing something?

Yup! The update log is mostly to keep people aware of what's going on with the revisions. If you got it with the bundle, you have to download it from the bundle page apparently.

I know because I just tested it out with something else in the bundle and it didn't let me download from the page.

Go to My Library and on the left hand side click on my purchases.

At the top, there's an option for Bundles, click on that.

You should see the Bundle for Racial Justice and Equality

Click on that, and it will bring you to the list but it should have a search feature.

Search We Used To Be Friends and the download button is there. I think you need to "claim" the download before it becomes something you can just see on the page moving forward.

Nice! I've been thinking about this game for the last couple of days and just found this page. Been itching to play it again sometime and I'm overjoyed to hear you're still working on it!

I bought this as part of the "Bundle for Racial Justice and Equality" last year, finally getting around to downloading it all now.

By any chance, with the name and design of the cover, would this happen to be inspired by a certain teenage private investigator from Neptune?

Though I guess I could have also led with Remember the Tritons but ... c'est la vie. ^_^

We Used To Be Friends is an arc-based teenage-detectives game that takes a lot of its influence and tonal pointers from Veronica Mars.

It's 50 pages, runs on the PbtA engine, and has really extraordinarily clean and good layout, although no illustrations.

Somewhat surprisingly, We Used To Be Friends is both GMless and a mystery game. These two elements are totally doable independently, but their nature makes them hard to combine.

That said, We Used To Be Friends pulls it off by giving a lot of advice on how the game is meant to be played---and also through some clever mechanical innovation.

In order to be suspenseful, a mystery needs to have information that's hidden from the players. We Used To Be Friends hides that information behind dice rolls and the choices of other players. Furthermore, it adds an extra layer of atmospheric suspicion by having multiple mysteries running concurrently. Every 'episode' or scenario has a mystery, but so does every PC---and the player mysteries are long arcs that stretch across multiple episodes and involve the recurring cast, making the game a *really* effective vehicle for long-running character drama.

There's also some other cool mechanical flourishes in We Used To Be Friends. For example, there are five core Moves and five core stats, and you get to lock a stat to each Move. So your Fight might be based on spotting weaknesses, but your friend's Fight might be based on throwing wild haymakers. There's also a sort of Dunbar's Number friendship system, where the more friends you have, the less strong those individual relationships are. The fewer friends, the tighter the bond. And how and where your friendship is allocated can shift over the course of a single episode of play.

Overall, even if you're not usually sold on GMless games or mysteries, I think this one is worth checking out. It *really* does a good job of using the other players as a sort of 'chorus' to GM scenes, but it *also* makes sure individual PCs get to have strong time in the spotlight and cool arcs with a lot of personal intensity. It's strange to see a game so successfully committing to elements that push in such different directions, but the result is a wonderful alchemy.

-This page doesn't show up when I search "We Used To Be Friends". It only shows up in the search results if I search for "ashcan". No idea what's causing that, but it makes it harder to find casually.

-Some section headings are missing caps from some words. Not sure if this is stylistic and intentional.

Thank you so much for the review!

Thank you for writing the game!

Hey, Jonathan.  I just bought and read through "We Used To Be Friends" and I had a question.

Maybe I just missed it, but the playbooks and moves mention "bank 1 Clue", but I never saw where "banking a Clue" was defined or explained.

The only thing I saw that mentioned a "banked Clue" was the Gumshoe move.

How do you use a Clue that you have banked?  Is it just used as part of the Gumshoe move to ask questions?

Hey! Yeah, one of the things I did notice afterwards was that we cut things down to try to fit work count but probably shouldn't have.

I've gone back over the text, as you may be seeing, and making sure this is super defined but here's the quick version of it.

Hopefully that answers the question.

Thanks for answering my question so quickly.  I appreciate it.

Do you define the Clue when you bank it or do you define it later when you place it as an Episode or Character Clue?

I can see where you could do it both ways and I'm not sure what your intention is.

You define what the clue is when you get it, both as what it is and where it goes (personal v. episode), but you define the context when you place it.

Thanks!  I appreciate your help.

I'm SO looking forward to finding a group for this one!

Hopefully you can! If it helps, because it's collaborative, I've had good games with 3 people playing.

Let me know if you're still looking!

Hey, I'm not sure if im missing something but I can't find a player amount in the book. does anyone know the recomended player amount?

It doesn’t have a GM, so really you can play with 2+ but I really recommend anything from 3-6 being optimal. Just gives people enough time to get some spotlight and some mystery stuff happening.

I got this game 2 years ago at GenCon and I SUPER love it!! My friends and I played about 2 episodes (we are slow). I like the cliffhanger mechanics, the character tropes, and the way that stats & moves are connected to each other. It was challenging to find ways to put the mystery together without a plan & the friendship/relationship mechanics were a bit unclear to us. Regardless, I love the vibe of this game & the length of the rules is great for me. (lol). PLAY THIS GAME!!!!!

Working the final version of the game, and part of that is giving more help with mysteries and cleaning up Friendship moves too! 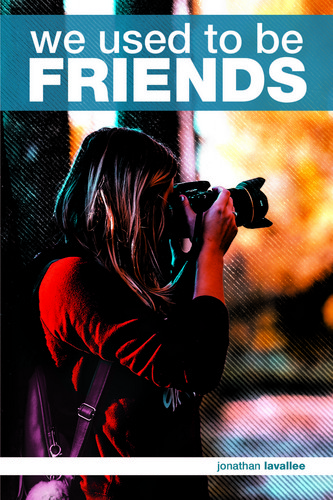